Can we read a book?

I did not grow up in a routine that involved bed time stories. And I believe that is the same with most people in India. My Aunt’s house had a nice collection of books and I used to borrow books from there. I had a special liking for books written by Enid Blyton. She was my favorite author with books like Famous Five, Secret Seven, Five Find Outers, 6 Cousins at Mistletoe Farm etc. Though I moved on to other authors later on, Enid Blyton has a unique place in my heart because her books were about children doing adventurous and fun things! I was never a voracious reader but I did enjoy reading until I got busy with work. It was after coming to the US that I realized the importance of reading to children from a very young age. Every flyer and magazine I chanced upon spoke volumes of how it helps in building language and vocabulary. I resolved to read books to Adith and generate a love for reading in him.

I tried with a few picture books but Adith showed no interest. Undeterred, I tried again and again until we reached a point where he would cry when he saw me taking books. I realized that this was more effortful than what I thought. My sister Preetha told me about the book “Mr Brown can Moo” by Dr. Seuss which is a big hit with young kids. Off I went trot, trot to the store and got that one and another “One Fish, Two fish, Red Fish, Blue Fish” by the same author. Nope, Adith still did not budge. He simply would not sit and listen! It became obvious that if I tried any harder, instead of love, I would create a life long hatred for books. So I kind of put my hands in the air and consoled myself that he would take a liking for books in his own pace.

And then it happened. A friend of mine forgot to invite Adith for her child’s birthday but gave me his due return gift when I saw her later on. It was a book titled “Discover the Day” from baby einstein. It was a board book with just 5 pages but it had something unique : buttons on the right that made different sounds when pressed! 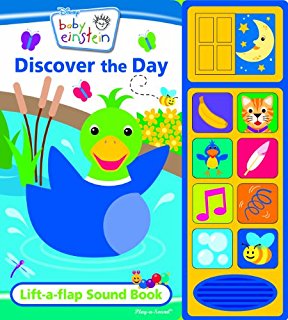 The fact that he could do something with his hands on the book fascinated him. He would not listen to what I read but enjoyed lifting the flaps in the pages and pressing the corresponding button on the right. At least, finally I got him sitting for a book! I realized that I could get his attention only if something about the book excited him.

Next, I had success with a book I borrowed from the library called “My big book of trucks”. It was a huge board book with pictures of all kinds of trucks. 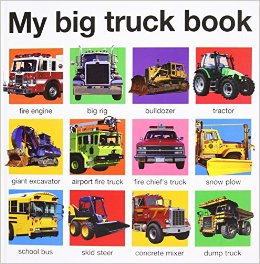 Since he was a huge fan of the garbage truck and all trucks in general, I knew I couldn’t go wrong with this one!  I have renewed and borrowed it multiple times.

The first story book I had success with was ‘Goldilocks and the 3 bears’. The book allowed plenty of expressions ( Cold..Ugh, Hot..Ouch, Perfect..Mmmm) and comparisons ( too hard, too soft, just right) and he thoroughly enjoyed it! This was the perfect book to practice “pause and wait” for him to fill in.

Since he seemed to like ‘Lift-a flap’ books, we tried one called “What do People Do” by Little People. Following its success, we got 2 more from that series. These were really good! It is not a continuous story but has over 50 flaps to lift and enormous potential for vocabulary building.

When he was a fan of Caillou, we bought a pack of Caillou’s Bedtime stories and now since he is a Blaze fan, we got a story pack of Blaze. Just trying to get books based on whatever he is fond of at the moment.

Some of the other books that I have tried are Harold’s purple crayon, Corduroy series, Biscuit series and books by Dr Seuss. Somehow, these did not quite ‘click’ with Adith but they are excellent books!

I gave additional stress on book reading and tried to find books that he liked after I came to know how important they are for a child with hearing loss. Sometimes, I order books through Scholastic in collaboration with his school.

Apart from the direct benefits, reading together also serves as a great bonding activity. Today, not a single night passes without him asking “can we read a book?” !