Adith’s school follows a specialized curriculum called CASLLS ( Cottage Acquisition Scales of Listening, Language and Speech). It is a model developed by ‘Sunshine Cottage School for Deaf Children’ in San Antonio, Texas and has 5 different levels namely Pre verbal, Pre-sentence, Simple Sentences, Complex Sentence and Sounds and Speech. Adith is currently working on the ‘Simple Sentences’ level and it has goals listed under headings of Listening, Cognition, Nouns and Noun Modifiers,Verbs, Tense etc. and takes into account, minute aspects of Listening and Speech.  The material is copy righted so I am unable to give a preview here but I have seen it and it is indeed a very comprehensive one!

Adith’s teacher sets goals for him as per CASLLS. The CASLLS tracker has age appropriate milestones divided into 6 months brackets as 19 to 24 months, 25 to 30 months, 30 to 36 months and so on. The teacher would basically look for those skills that are currently not perceived in Adith and work on it, starting with the earliest ones and this way, tries to bridge the gap between his current skills and what is expected of his chronological age. She then plans activities targeting those goals. This quarter, he has been working on sequencing, ordinals and pronouns. 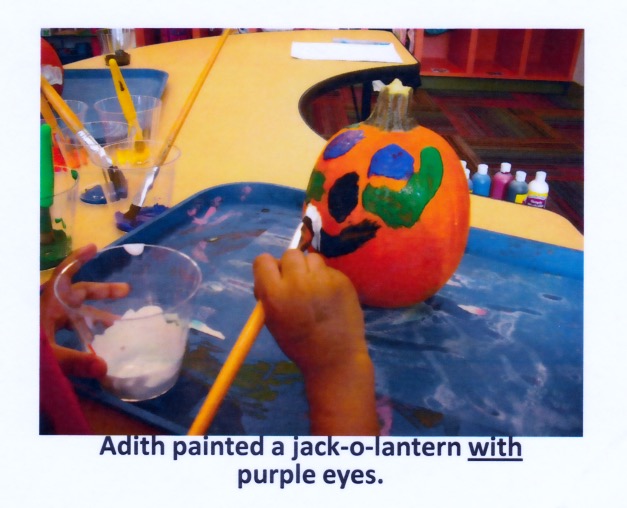 I recently had a meeting with his teacher and she was all happy about him. It was nice to hear that he was picking up well and making great progress. She also mentioned with a laugh that Adith addresses everyone as  “mone” and was curious to know what it meant. ‘Mon’ means son in Malayalam and I often call him “Mone” at home (when I am being affectionate). He probably thought it was a generalized way of addressing people and called his teachers and friends as “mone”, haha! I was reminded of how he used to call all his teachers and therapists, “Amma” a few years back!

Speech at School
His Speech therapist at school has a chart which has a picture of a mountain and during a class, she used a picture prop to show a child climbing up this mountain to pictorially represent how he is performing. She emailed me that Adith climbed to the top of the mountain twice last week. I asked Adith about this and he was beaming with pride! It is a very simple idea but gives such a positive reinforcement! No wonder he absolutely loves school!

Apart from the classes for structured language and speech, he has ‘Discovery room’ sessions which also focuses on vocabulary/language building. Last year, he was napping in the afternoons but this year he has classes of Read Aloud and Math instead. There are a lot of different classes and while this might look ‘a lot’ in writing, the classes are designed in such a manner that there is never a dull moment!

Speech at Children’s hospital
As mentioned before, Speech at the hospital is something new we started this year. Two weeks back, we reached about 30 minutes early and while Adith played at the mini computers in the waiting area, I read the MED-El blog about ‘Using Apps to develop your child’s spoken Language skills‘. The author had written about promoting ‘Theory Of Mind’ language while reading books with your child by asking “What would happen if?”, “Is she sad…?” etc. and 15 minutes later, I saw his therapist doing the exact same thing while reading the book “Room on the Broom”! She was also asking comprehension questions to make sure he was following the story!

The therapist is also working on fine tuning his hearing. He would have a worksheet with pictures of similar sounding words like full, pull, pear, fair, pool, fool etc. in front of him and he has to point to the right word when the therapist says it from behind. This was really really hard in the beginning but he is getting better at it. The way she does this is, they will be playing a board game and he has to do one listening prior to each turn. This way it is a mixture of listening and fun. And to keep him engaged, she comes up with new games every Friday!

Typically the speech session at the hospital gets over by 9:45 AM but sometimes I let him play at the hospital for a little while before dropping him to school. This is because I know it is indeed heavy-duty listening and that he needs some downtime!

To sum up, I feel he is in good hands at all ends and I am feeling thankful for it! This is what every parent would wish for their child and especially so when you have a child with a special need. In the beginning, everything was new and blurry but now things have fallen into place and I feel he is steadily moving along a promising path.