We reached back home today morning from the hospital. Everything went well, thanks to everyone who kept us in their thoughts and prayers. Even though we did not have any family here physically, everyone extended their wishes through phone calls and social media and that meant a lot to us!

We were asked to check in at 7:30 am in the morning and for once, we made it before time!

Our friend Annie came to the hospital at 7:45 am and stayed with us till 10:30 pm! She was excellent in engaging Nivedh and gave us good company. Hope the pictures below will give an idea about the whole process..

Though he was prepared well and explained about masks for putting to sleep, the doctor suggested he be given a medicine orally to induce sedation. (No matter how much prepping they had, they get fussy once in the OR seeing all the lights and equipments).

Adith fought hard to stay awake even after having the medicine. He managed to ask the doctor about his watch and told me I might fall off from the bed. But his movements were becoming heavy and eyelids were drooping. He seemed angry that he could not sit up on his own but finally gave in. He was rolled into the OR at 8:45 am and at 10:30 am, we got the first update that the surgeon had started with the procedure and is busily working away.

At 11:30 am, our audiologist came to the waiting room and informed that the implant has been inserted and tested and the surgeon is now in the final stage of the procedure.

At around 12:15 pm, the surgeon himself came to the waiting room, called us aside and informed that the procedure is over. Everything went well, there were no unexpected events.

At around 12:30 pm, Loveson and me visited Adith in the recovery room. He was sleeping and had a thick bandage around his head, covering his ears. I stayed on while Loveson returned to the waiting area.

From there he was taken to radiology room for imaging of the head. This took only around 10 minutes.

Finally, he was moved to our room in 8th floor where Loveson and Annie were waiting for us along with Nivedh. He had slept through the whole procedure and was still sleeping.

Adith slept on for several hours in the room. 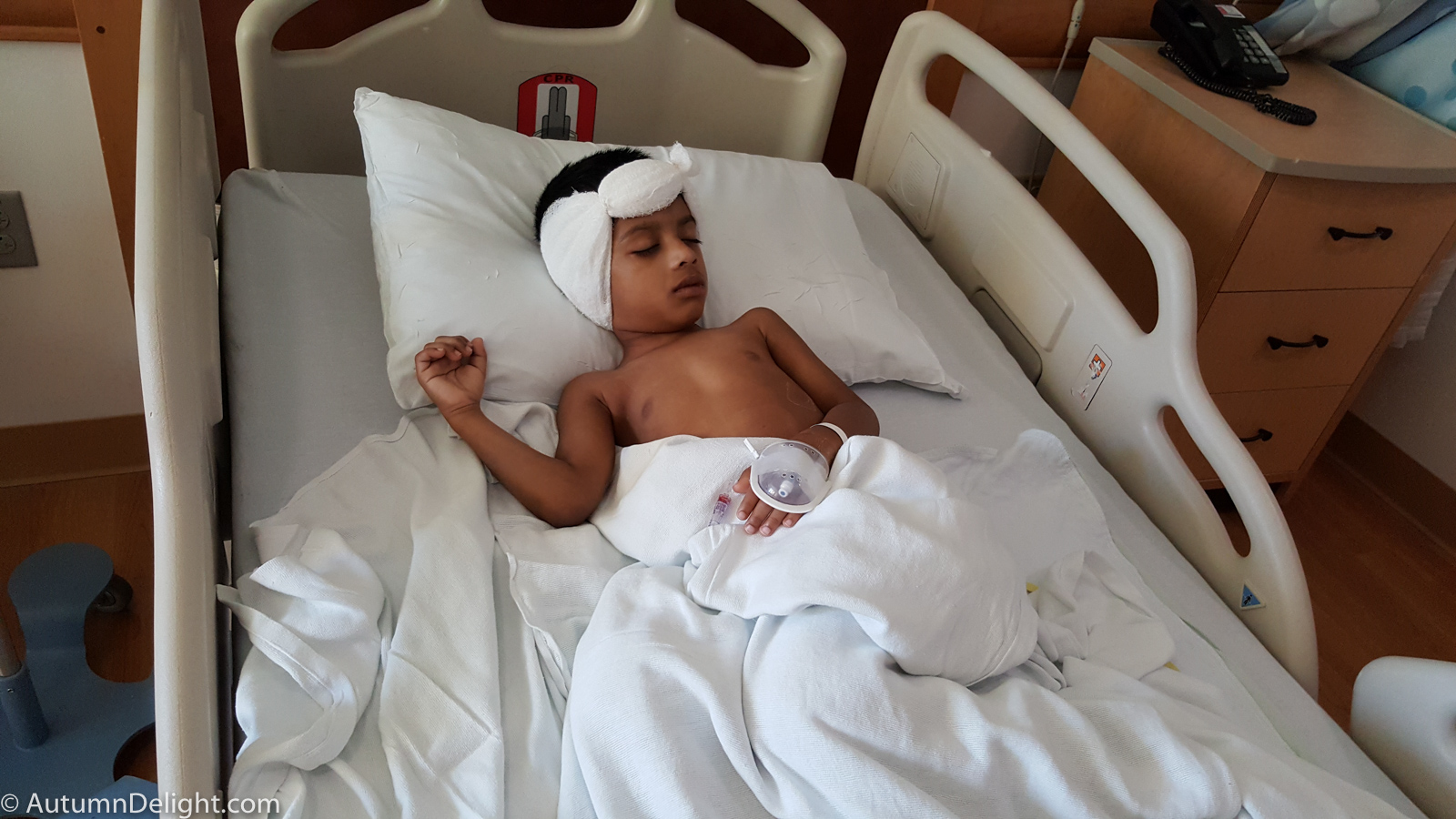 By evening, he was up and I asked him “Are you tired?”. He replied “I am ok”. His last words before being rolled into the OR were very slurry (since he had the silly juice) and hence it felt nice to hear his voice clear and firm.

He asked for candy and I gave some MnM’s. Later he had apple juice, JELLO and popsicle. After one hour he ate a kid meal of spaghetti and meatballs! He hardly ever finishes his food so I was quite surprised. Must have been really hungry!

Since he was taking food, his IV was removed and he started to move around. He still looked very tired though.

By late evening, he was active and played with Nivedh. A nurse had thoughtfully given some toys to our room and the boys had fun. I wanted Adith to be out of the hospital gown and changed his dress. Unfortunately, in the process his bandage got loosened a little bit and it started to slip down, almost covering his eyes. After a couple of attempts to put it back right, the nurse finally held it in place by using additional gauze that ran across his head from above the forehead to the back of his head. Silly me, sigh!

His nose bled a couple of times before going to bed but the nurse assured that it usually happens.

All of us stayed in the hospital for the night. Did not get much sleep but we made it through somehow. At 7 0’clock in the morning, an ENT doctor came for the rounds, gave us the prescription for antibiotics and said we could go home when the paper work was completed! We were done in a few hours and reached home by 10 AM! What a quick discharge!

Both boys slept on the way home and continued to sleep even after reaching home.

When Adith woke up, we had a present for him! It was promised that he would have this when he returned home after the surgery.

From then till now, it has been ‘Vrrr Vrrr’ inside the house! 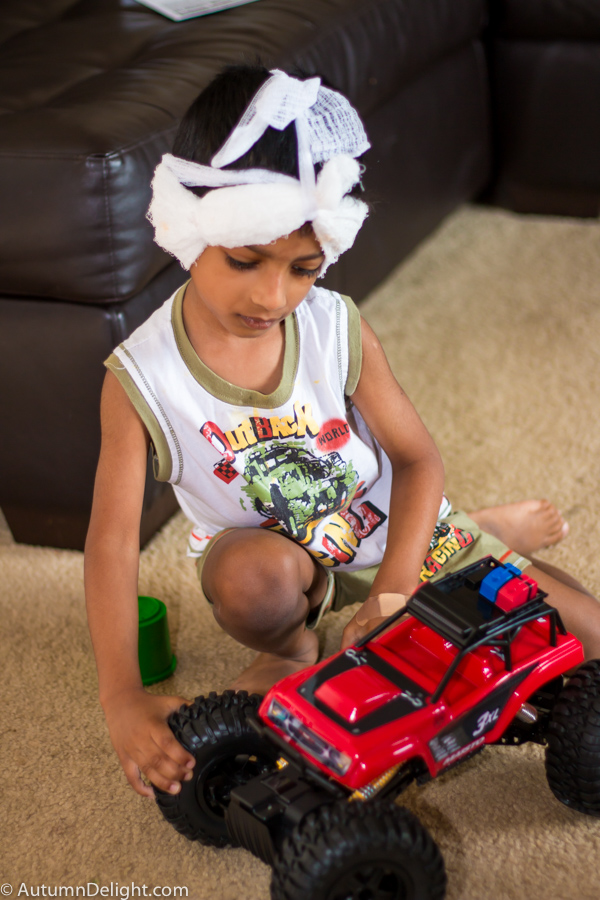 We are so glad that everything has been smooth so far. The care at Children’s was outstanding. The doctors and nurses were just amazing!

The major challenge now is to keep him from jumping around the house for the next few weeks. The bandage can be taken off tomorrow and that should give him some relief.

The big day has been scheduled – the activation will be on August 5th :).

So that was an overview of the beginning of a new innings. Looking forward to some exciting times ahead!