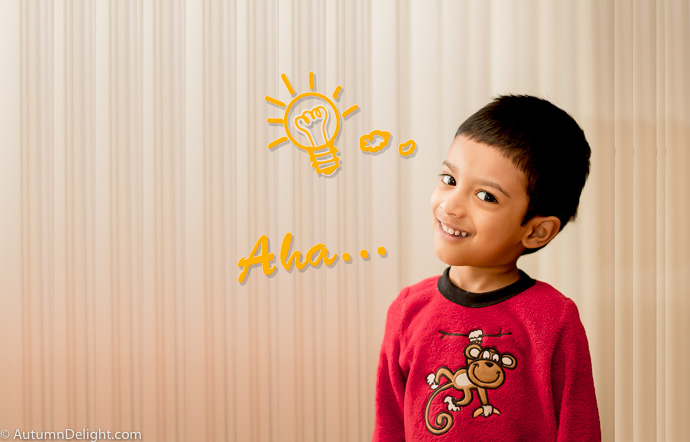 Say, you have been working hard to achieve something but in spite of your best efforts, its not happening for some reason whatsoever. And just when you were on the verge of losing it all, someone intervenes and gives you an amazing piece of information about something that you were not aware of, which was the actual reason behind your failure! Wouldn’t you feel ‘Aha, so this was it’! This moment of sudden insight is called an ‘Aha moment‘. And it is this single moment that saves you hours of slogging in the wrong path. Here is one such instance I read about the other day.

‘Profoundly Strong’ is a blog that I have been following for a while now – 3 year old Fiona’s hearing journey as told by her mother. Fiona has cochlear implants to help her hear. Incase you don’t know, cochlear implant is a set of electrodes surgically inserted into the cochlea of the ear. There is also an external processor that converts sound signals into electrical signals and these are passed on to the electrodes in the cochlea. The electrodes stimulate the auditory nerves and this information is carried to the brain where they are interpreted as sound. In other words, while hearing aids are mere amplification devices, implants work in a whole different way, bypassing the outer and middle ear functions. Implants are used when the hearing loss is so high, that there is little or very less benefit from using a hearing aid. I do not have in depth knowledge about its working but one thing I am certain is that it gives access to more sounds and in a much clear manner. I happened to read the experiences of a man who was a hearing aid user and decided to get implanted at a later age – he was amazed that there was a sound when he turned on the ignition of his car and when his dog scratched on the floor with its claws! He had not heard them before! The sounds seemed synthetic at first with clicks and beeps but he could hear sounds never heard before and with more clarity. It was like a whole new world!

With her implants, Fiona had remarkable access to sounds around her but even after a lot of listening, she had difficulty with some consonant sounds and was substituting ‘n’ and ‘h’ in their place. There was no doubt that she could hear the sounds well with the implants so why did she have trouble rendering it? Some sound substitutions are typical, like ‘wook’ for ‘look’ and ‘wed’ for ‘red’, but this was not a typical substitution error. Her mother took her to an Institute as per the advice of her therapist and that is when she realized that Fiona had ‘Dysarthria’!

I had heard about Auditory Neuropathy and Apraxia but this was something I had not heard of!  Dysarthria is a condition in which the tongue muscles used for speech are weak. The muscles of the tongue play a vital role in producing speech sounds – some sounds require more strength while others not so much. ‘n’ and ‘h’ were sounds that required very less strength and hence Fiona could say them easily, which explained why she substituted them for others which required more strength! This finding was certainly an Aha moment for her mother. Sure, it presented one more problem to deal with and there was a new addition – ‘Oral motor exercise’ to her weekly therapy sessions but at least they were able to diagnose it in time and take appropriate steps. Speech therapy alone would not  have helped her/taken much longer to get this issue corrected.

I daresay, Fiona was lucky to have her issue diagnosed in time – not everyone would have their Aha moments when they actually need it. Often by the time we realize the real culprit, we would have lost significant time and/or money.

We have been working on the ‘f’ sound since last May. Adith was substituting ‘p’ for it, which is also a common error. He can now say the ‘final f’ words like ‘knife‘ but initial f  and medial f words (like face and elephant) still prove to be difficult. Face is ‘f..pace’ and elephant is ‘elepant’. During our speech practice, he can say it correctly at times but often in spontaneous speech he says “One, two, three, por, pive” :). The other day he was counting something and after 3, paused and said four and five in a soft, slow tone, but said it right! He had to put so much focus in saying it correctly but still managed to count right! Little champ!

‘f’ is a high frequency sound and is known to be one of the hardest sounds in general but I trust there is something more to it that is taking us so long to master it. If only we had an ‘Aha moment’ too, sigh!